The story of TEN began in the 1960s as a ‘heart cry’ response to the desperate plight of Christians suffering under communism in Eastern Europe. More than five decades on, Europe has the smallest percentage of evangelical Christians of any continent—only 2.5% and is the world’s most needy mission field. 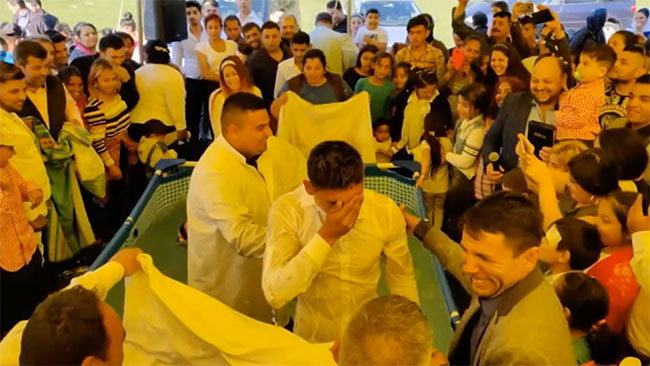 An introduction to TEN

David Foster, a travelling journalist and an evangelical Christian, started writing articles about the amazing believers he came across and the various trials they faced in living out their faith. Support came flooding in, both financial and prayerful, and Eurovangelism was born as a means of supporting beleaguered European Christian communities. It was a ground-breaking approach of assistance to the indigenous church planting movement as opposed to the traditional model of sending missionaries abroad.

In 2017, Transform Europe Network (TEN) was adopted as the new operating name for Eurovangelism to represent the holistic and cross-denominational Christian network it had become. Over the years the ministry has focussed on both evangelism and social action.

Significant moments in the history of TEN:

In 2020 the world was hit by the coronavirus pandemic. TEN’s partners were hugely impacted. Many caught the virus and two of our partners died as a result of contracting Covid-19. Our partners faithfully served their communities during this time, sharing and showing the love of Christ. Roma communities were particularly badly hit.

TEN supporters responded incredibly, and we were able to stand with our partners during this very difficult time. God’s faithfulness was seen in many ways. During 2021 we began to hear stories of folk coming to faith and baptisms. The months of lockdown gave TEN the opportunity to expand its digital communication making it central as to how we operate. We had our first online partner-supporter prayer gatherings, an online partner conference and have continued to experiment with new ways of supporting our partners. 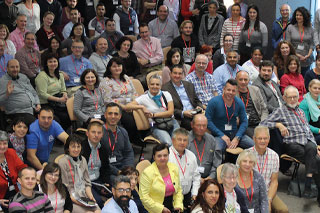 This was a significant period of change for TEN in the UK, whilst remaining as committed as ever to our partners and the founding ethos of the charity.

During these years Tenacious, our book of partner testimonies was published and we ran our first Partner conferences for our network in 2014 and 2017. These were wonderful times of encouragement as we gathered together. Our network was consolidated further, with our focus increasingly in Eastern Europe.

During this time, we also changed Eurovangelism’s operational name to Transform Europe Network and in 2019, James Vaughton was appointed as CEO, following the retirement of Gerry Partridge.

During this period Eurovangelism were pioneers in introducing the Alpha Course to Central and Eastern Europe.

The course is a fantastic resource for sharing the good news about Jesus with people searching for the meaning of life. It is also used as a means of discipleship, triggering discussion and debate within a safe and friendly environment.

We have trained local Christians to lead and teach others to lead courses within their own localities. We have also facilitated and funded the translation and production of the Alpha Course materials in 11 languages. Over a thousand courses have been run in countries where Christianity was illegal less than 20 years previously.

The regions of Abkhazia and South Ossetia both located on the border between Russia and Georgia are areas of intense political power struggles, as both countries lay claim to them. Meanwhile, separatist groups in the regions fight for independence.

In August 2008 both Georgia and Russia sent tanks and planes to lay claim to South Ossetia. Many were killed and others lost everything. Eurovangelism sent aid via our partners in Russia to assist 35,000 refugees in the aftermath of war. They not only offered food and medicines, but also love and counsel to those suffering.

During this time of great need, God used ordinary people to make an extraordinary difference.

Serb forces flooded into Kosovo with ethnic cleansing policies. Tens of thousands became refugees overnight as they fled from the terror.

One of the destinations was Macedonia. Eurovangelism contacts in Serbia told us of a church in Macedonia that we could partner with, using it as a base for sending emergency aid. A partnership that remains to this day.

We made an appeal and got a truck away in days. It was particularly rewarding that at the very hour the truck left, a UN representative was telling the nation, ‘It will take us a week to ten days to get everything in place to launch a relief programme.’

With the Chechen people actively seeking independence, Russian President Boris Yeltsin ordered a large-scale invasion. The Russian army obliterated much of the city of Grozny, although the evangelical church was miraculously spared. Eurovangelism went to Grozny to distribute aid, working with the church to provide much needed help.

Former Director Gary Cox recalls, “All along the way we had the opportunity to talk to the young Russian conscripts who had the unenviable task of trying to keep the terrorist rebels in check. Many were young men far from home, fresh out of training living with constant fear of attack. We offered them a Bible each and they all took one. Many of them just opened it and started to read there and then. It was amazing, even bizarre! Yet I guess when you might be bombed or shot at any moment, you are desperate to know where you might go from here!”

1992: War Breaks Out in Yugoslavia

The void left following the collapse of communism in Eastern Europe was filled in many cases by nationalism. This was especially true in the Federal Republic of Yugoslavia. The ethnic divide between various member states erupted in a series of civil wars during the 1990’s.

Seemingly, democracy offered Yugoslavia a fantastic opportunity for development and political freedom. Tens of thousands were displaced, and ethnic cleansing programmes took place across Yugoslavia. Today, the region is divided along ethnic lines, and many still live with the pain and the hatred that these wars produced.

Eurovangelism has sent hundreds of tonnes of aid to the area to help refugees and in so doing has forged relationships with Christian leaders and churches that remain to this day.

1989: The Berlin Wall Knocked Down

The Berlin Wall was a terrible symbol of the division of Europe during the cold war. The destruction of the wall in 1989 was an answer to decades of prayer.

Being a follower of Jesus had been outlawed under communism and professing Christians had endured terrible persecution because of their faith. This event reminds us to never give up hope and to keep praying, God in His time will answer!

In the subsequent years, the church in the former communist countries has grown and developed but there is still a lot to be done. Eurovangelism continues to focus on helping the churches in these nations to be more effective in sharing the love of Christ amongst their local communities.

Thousands of people suffered in this traumatic and large scale earthquake. Eurovangelism’s former Director Gary Cox recalls, “Many pregnant women at that time gave birth prematurely due to the trauma they went through. We were able to deliver incubators to the maternity unit in Yerevan. I will never forget looking at these minute babies who would not have survived without our help.”

Eurovangelism and Tear Fund combined to help thousands of victims. Partnering with the Baptist church meant that Christians who had been persecuted for decades were seen in a new light as they demonstrated the love of God in very practical ways.

It’s hard to believe that four days passed by before the world was aware of this huge catastrophe.

The explosion of a nuclear reactor plant in Chernobyl ruined thousands of lives, as people were maimed and loved ones were lost. The devastating after-effects continued, as babies in the womb at the time of the explosion were born with horrific deformities.

Eurovangelism joined with other Christian agencies and our partners in Russia, as together they delivered aid, brought comfort and inspired hope, all in the name of Jesus.

The Solidarity Movement was a workers union that fought for rights and spread anti-communist ideas. The movement announced a strike if the government continued to suppress political dissent, so on the 13th December 1981, martial law was declared.

“Sunday 14th December 1981 will remain in my memory as a key moment in my life,” says former Eurovangelism Director Gary Cox. “I was in Warsaw to deliver the first ever truckload of aid to a starving Poland. Waking up that Sunday morning and seeing tanks on the streets was the last thing I expected. Yet I was at peace, knowing God had placed me there at that time for a purpose.”

What followed was a whole programme of aid and ministry, which extended right through the 1980s. “To be involved in ground-breaking ministry at that time accompanied by others such as Luis Palau, Nicky Cruz and Cliff Richard was a real privilege. We sowed some good seed during that traumatic and unstable period, that is still producing fruit today”.

1980: Aftermath of the Earthquake in Naples, Italy

In the winter of 1980, an earthquake left thousands homeless in Naples, Italy. The late Ken Bawler and his wife Freda from Eurovangelism went out to help wherever they could in this very desperate situation. Elderly people and children were sleeping in tents, most survived without anything more than the clothes they were wearing.

Freda recalls, “One lady approached us walking in the snow in only a pair of slippers! God provided throughout the eight weeks we were there. Before we departed, one sponsor gave us money specifically to help babies in Italy, and it wasn’t until we arrived and found a milk shortage for new-borns that we realised God was already working in the situation.”

The ‘Prague Spring’ was headline news as the government and people of Czechoslovakia tried to release themselves from the yoke of communism and the rule of Moscow.

The Russian army moved in under the false belief that they were going to liberate the people from a coup. Expecting cheers and flowers, they were bewildered when they encountered hostility and abuse. Instead of liberating the Czechoslovakian people, the Russian army remained for a further 22 years, subduing any form of dissent.

Dave Foster, founder of Eurovangelism recalls, ”We saw this as an opportunity, so I flew into Prague on a Czech plane. I was the only passenger. On arrival, immigration officials were amazed. I wanted to come in, as everyone else was trying to get out! Together with our Czech brothers we were able to distribute the Word of God to Russian soldiers. It proved that in any situation there is an open window of opportunity for the gospel!”