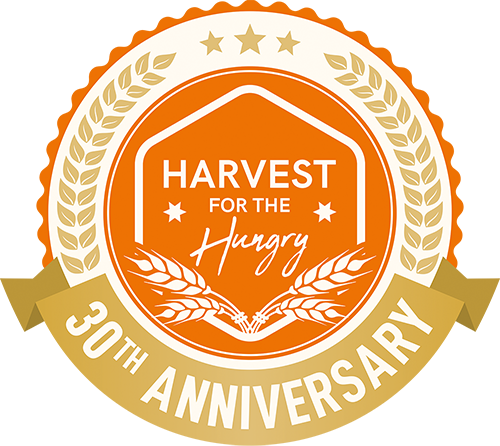 In our 30th year of Harvest for the Hungry, find out how Harvest all started. Follow our blog to read the story of how God worked in the life of Derek Wade to spur him on to pioneer this vital Kingdom work. Find out why Harvest still matters today. 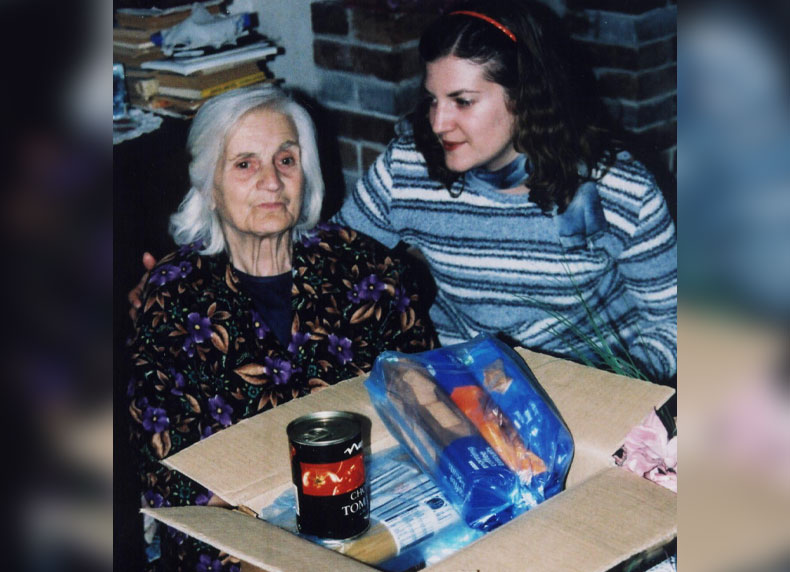 The Start of Something Big

Derek Wade started what is now known as Harvest for The Hungry during the Balkan War, a conflict which resulted in 2.4 million people fleeing to other countries, and a further 2 million internally displaced.

Derek mobilised churches and schools around Kettering and Bristol to respond, packing boxes with food, and sending them with clothes and other aid from churches and schools across England via Transform Europe Network (then known as Eurovangelism). TEN used its well-established links locally to ensure aid got to where most needed.

Explaining how his food parcel vision developed, Derek, a member of St Botolph’s Church in Barton Seagrave, said: “In 1991, I was Head of Science and Maths at Dunstable College. Our two children had left home, and Jane, my wife, and I were considering going into some form of full-time Christian work. Two close friends had been going into Eastern Europe in the Communist days, taking in Bibles and aid. We’d prayed for them as they travelled, and through them the needs – spiritual and physical – of those living in those countries started to hit home to us.”

In Northampton, foreign orchestras often performed at the Derngate Theatre. Derek, Jane, and some friends formed a group who obtained bibles in the language of those performing, waiting outside the stage door to offer them as performers came out. Derek said: “On one occasion, the Sofia Philharmonic Orchestra played.” The principal cellist, who was also a member of the Bulgarian Parliament said to him, ”How is it you can buy Bibles in our language, but we can’t even get paper to print them in my country? I would so love some bibles to give to prisoners.”

”How is it you can buy Bibles in our language, but we can’t even get paper to print them in my country? I would so love some bibles to give to prisoners.”

Through Gary Cox, Director of TEN at that time, the group located Bulgarian Bibles in Stuttgart. That summer of 1991, Derek, Jane, and a friend took humanitarian aid, the 300 Bulgarian bibles collected in Germany, and hundreds of Romanian children’s Bibles to TEN’s projects in Romania and Bulgaria, making a 5000-mile round trip in a large Transit van. The children’s Bibles were donated in memory of a girl from St. Botolph’s Church, who was killed in a car crash. “It was on that trip to Romania that I realised the difference food parcels made to families in extreme poverty,” Derek said, “and I guess that was when vision for HfTH started to develop. I returned home and spent most of the year applying for safe Christian jobs but nothing materialised. I asked TEN if I could work for them. But they said ’we’d love to have you but can’t afford you.’” 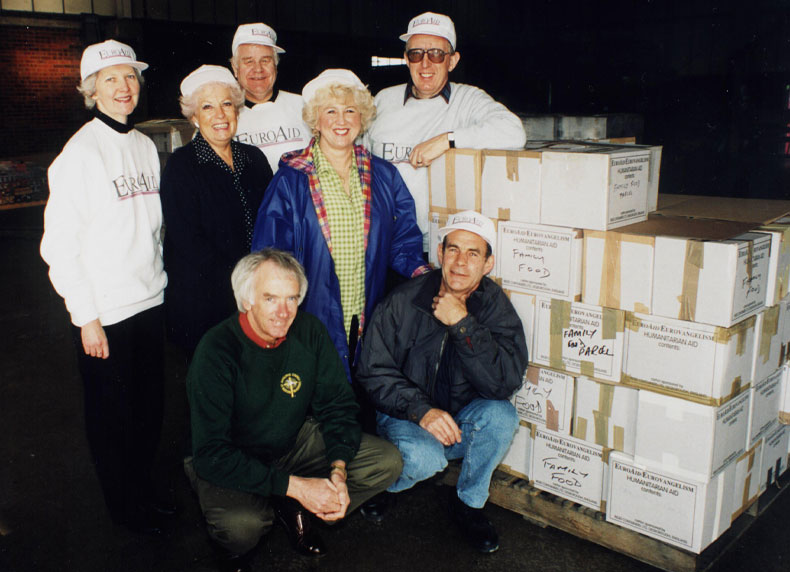 Light in The Darkness

In what Derek calls a ‘God incident,’ Bedfordshire County Council, his employer, were offering early retirement packages. Derek applied but was rejected. Shortly after, the Council said they would reconsider. He reapplied, was accepted, and left with a full pension aged just 49!

In September 1993, Derek was appointed Director of ‘EuroAid’, emphasising TEN’s humanitarian work. Now with some income, TEN topped up his pension to a living wage. In April 1992, the Balkan War escalated with the siege of Sarajevo. In the autumn of 1993, TEN was offered the chance to share the cost and load space of a giant transport plane, taking vital aid into Zagreb.

“That airlift of food parcels was the beginning of an annual Harvest time project which has become ‘Harvest for The Hungry’,” Derek said. “So, this Harvest will be our 30th anniversary. As I look at the devastating Ukraine war, the similarities are so clear: a brutal focus of aggression sending refugees fleeing, and the knock-on effect on those neighbouring countries providing refuge and help.”

Now full-time with TEN, Derek sent a series of mailshots to every church leader and headteacher in selected areas, inviting them to pack food parcels.

Derek said: “That first year we filled half a truck from TEN (around 1,000 parcels) Almost every church and school in greater Kettering joined in. I’d write a letter, visit to give a presentation in schools throughout the day, and churches in the evenings. Schools and churches celebrate Harvest but often didn’t really know how to focus their appeal, so when we presented the need, they were delighted to help!”

“Some schools decorated the photocopy boxes they had packed with goods. Often, when reporting back in an assembly, I’d show a picture of boxes being handed over and a pupil would shout out ‘Hey, that’s one of our boxes!’ The schools were really happy that their hard work really made an impact.” 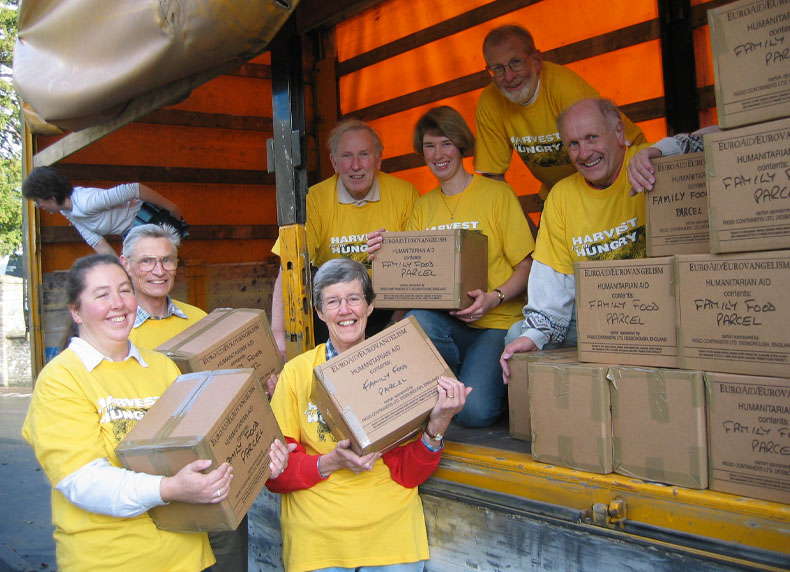 HfTH quickly attracted increasing support across the UK. Derek commissioned a local manufacturer to supply strong boxes for HfTH use. That first year of HfTH, the boxes were flown out to Zagreb.

From then on, TEN, with growing support started their own appeals – led by Derek. Soon annual deliveries were made to Russia, Croatia, Bosnia and Herzegovina, Montenegro, Kosovo, Albania, Bulgaria, North Macedonia, Serbia, Romania, Moldova, and other countries.

Each year larger mailshots, more days on the road for Derek, and presentations made right across the UK. “My goal was to get at least one TEN-supporting church or school in every postcode area,” Derek explained, “and by the time I retired, I succeeded.” As HfTH grew, it was not just churches and schools who got involved. Factories, head offices and all sorts of businesses joined in the appeal, often through a Christian employee sharing the need.

Over the decades Derek collected many amazing stories to share, but one sticks in his mind – when the local mafia came to help! Derek explained: “One year my wife and I were in a car accompanying one of our trucks travelling south through Bulgaria. We got to a town called Blagoevgrad and the truck driver parked his truck perfectly legally, so we could unload some parcels for the local church to distribute. We had just completed this when two large policemen approached us stating that the driver had to follow them to the police station where he would be dealt with for illegal parking! We started praying, as we needed the truck to be able to carry on and delivery its full load.

“Our protests led to nothing. We couldn’t find the local church — who had been with us only minutes before when we handed over their parcels… Jane and I remained in the car and prayed our socks off! Sometime later, the missing pastor and another man went into the police station. It turned out the pastor, knowing the police would cause trouble, went to find his brother — who happened to be the leader of the mafia in the area! As a result of his ‘creative’ intervention in the police station, the truck was allowed to proceed!”

Can you support Harvest for the Hungry this year? 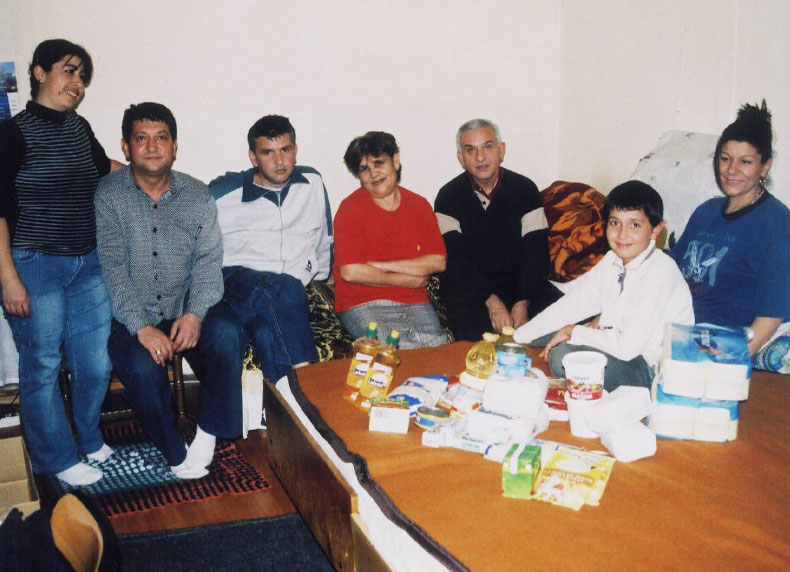 A Need Greater Than Ever

Family in Croatia with Food

In the early years, TEN sent articulated trucks out each year from the UK, each one holding 2,000 parcels.

Derek explained: “In those early days, in many Eastern European countries there literally was no food on the shelves. So, getting bread, tinned food or goods was very hard. Plus, if you tried to transfer money, funds were often held in banks for months and in some cases disappeared!

“Over time, as the countries moved from their Communist bases, and food became more readily available, it was often much better to send funds to partner churches who could literally buy goods from the local market, thereby supporting local farmers and suppliers, and we would not have the expense of sending trucks across the continent.”

“Sadly I fear HfTH will be even more needed this year, and in the following years.”

Now retired, Derek focusses his attention just on the Kettering area. This year he is encouraging every church and school to take part in TEN’s 30th anniversary appeal—especially because of the impact of Covid and the war in Ukraine on neighbouring eastern European countries where in some cases, inflation has risen to over 30% (Moldova).

Derek concluded: “When I started HfTH I had no idea that thirty years later it would still be needed. But with the similarities between what we started with in Bosnia and Kosovo, and the current invasion of Ukraine, and the impact that is having on all eastern European countries, sadly I fear HfTH will be even more needed this year, and in the following years.

“That very first year in Zagreb, someone said to me ‘we are so grateful you brought these parcels. I trotted out ‘Oh, it’s only a drop on the ocean with these parcels.’ But he came straight back with ‘Yes, but we are holding out our buckets for these drops.’”

We hope you have been inspired by Derek’s story. We are really grateful for his pioneering work which established Harvest for the Hungry and has enabled us to bring hope through Harvest. Above all, we praise and thank God for the thousands of people whose lives have been transformed as our partners in Eastern Europe and the Balkans share the good news and Jesus in word and deed.

Can you support Harvest for the Hungry this year?